You are here: Home » » Research | Bridging the gap - how compensation practices can reduce the gender wage gap in Ontario Nonprofits 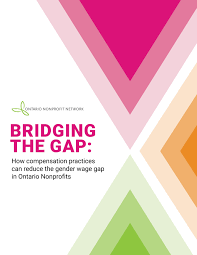 ONN’s research on decent work for women in Ontario nonprofits identified that a gender wage gap exists for women workers in the sector.2 We confirmed three aspects of this gap:

A phenomenon known as the “care penalty,” where wages in the sector are lower in comparison to other sectors because of the traditional association between “care work” and “women’s work”. This is despite the fact that the nonprofit workforce is highly educated, experienced, and performs a wide range of types of work. 2017 Statistics Canada data reveals that the average compensation in nonprofits was $42,500, while average compensation for the entire economy was approximately $59,800.

Within the sector, women have lower compensation than men (which consists of both wages/salary and benefits). In ONN’s survey of 645 Ontario nonprofit workers, racialized, immigrant, and Indigenous women, and women with disabilities reported experiencing the gender wage gap more commonly, as did senior leaders compared to middle managers and front-line/non-management positions. The 2019 Canadian Nonprofit Sector Salary and Benefits Study by Charity Village report highlights that the gender wage gap between men and women is the greatest at the senior leadership level (17%), where men reported an average salary of $100,733 and women $85,760.

Limited access to a pension plan, health benefits, and maternity and parental benefits top-ups together lower women’s overall total compensation over the course of their life cycle.

The gender wage gap in the nonprofit sector is a result of various factors. Some of these are unique to the sector, and some are ones that exist in the broader labour market. For example, the “care penalty” means the sector’s work is devalued and consequently lower paid, which is in part due to the fact that it is a womanmajority sector. An estimated 80 percent of workers in nonprofits across Ontario and Canada are women. This is particularly harmful for women’s organizations and organizations that serve marginalized women as they are the lowest funded and have the lowest wages in the sector, which further fuels the notion that they are “risky” organizations to invest in.

On the other hand, just as in the broader labour market and other sectors, unequal gendered negotiating patterns, lack of pay transparency, and discrimination based on different facets of a woman’s identity further impact the gap.

Fair wages are a significant element of decent work: work that is fair, productive, and stable. The nonprofit sector’s greatest resources are its employees, and when they are offered decent work, they excel. In turn, organizations are better able to meet their missions and contribute to thriving communities.

While it is important to focus on broader labour market levers that impact both the gender wage gap and women’s participation in the labour force (including childcare, harassment, and violence against women), another critical intervention point is paying particular attention to compensation practices of organizations. Sound practices that are regularly reviewed can close the gender wage gap over time.

Compensation practices are often not as neutral as we think. Rather, they can be steeped in gender, race, class, and ability biases (to name a few) and negative stereotypes. This can cause adverse impacts on different groups of women and render their work invisible or devalued. A lack of compensation practices can also contribute to inequities.

For a full copy of this study, including useful how-to information on eliminating the wage gap, click here.

ONN is the independent nonprofit network for the 58,000 nonprofits in Ontario, focused on policy, advocacy and services to strengthen Ontario’s nonprofit sector as a key pillar of our society and economy.

ONN works to create a public policy environment that allows nonprofits to thrive. We engage our network of diverse nonprofit organizations across Ontario to work together on issues affecting the sector and channel the voices of our network to governments, funders, and other stakeholders.