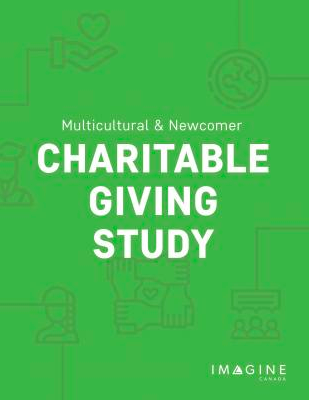 Newcomers to Canada and second-generation Canadians are highly motivated to support charitable causes, according to a new survey from Imagine Canada, Ethnicity Matters and a coalition of charities and nonprofits.

The 2020 study, titled the Multicultural and Newcomer Charitable Giving Study, is one of the first in Canada to explore the influence of ethnicity on supporting charities. The study’s conclusion: the communities surveyed – South Asian, Chinese, Filipino, Black (Afro-Caribbean/African), Arab and Iranian – share a strong willingness to embrace community service.

The study shows that newcomers to Canada and second-generation citizens are driven to give and volunteer out of a sense of duty to advance the well-being of their communities and Canadian society generally. Empathy for those in need is deeply rooted in strong family and religious values.

Three quarters of those surveyed say giving is the right thing to do, while seven-in-ten believe it is very important to pass on these values by teaching their children about the importance of charitable giving.

“The good news emerging from this research is that generosity is thriving in multicultural communities across Canada”, says Bruce MacDonald, President & CEO of Imagine Canada. “The experience of settling in a new country has given newcomers and second-generation Canadians a highly compassionate perspective on taking care of others. Charities and nonprofits are on the frontline of providing services when people arrive in this country, so their first experiences reflect a caring society. These groups are highly aware of the goodness created when people help each other.”

The study also underscores the enormous potential for charities and nonprofits to engage multicultural Canadians in their respective causes that would include participation as donors. The survey found, for example, that six-in-ten donors (58 per cent) believe they can give more and only a third are happy with the amount they give.

Findings related to the willingness and ability to give, coupled with census data, indicate that the newcomer groups surveyed have the financial capacity to provide charities with nearly $1.7 billion in new funding annually.

On average, newcomers and second-generation Canadians give $857 per year in donations

The influence of COVID-19 on attitudes towards giving among these Canadians was partially measured by a follow-up survey of two of the groups – Chinese and South Asian – in the original study. This research found that 30 per cent of those surveyed intended to increase their donations in response to the pandemic.

“The face of Canada is changing, and we are entering a transformational period,” says Bobby Sahni, Partner & Co-founder of Ethnicity Matters. “This study should serve as a call to action for all Canadian CEOs and stakeholders of the sector to understand and capitalize on the importance and generosity of ethnic communities.”

The study was sponsored by Blackbaud, a cloud computing provider that serves the social good community.

“In order to best serve, we must first listen and learn. The insights elevated within this study will allow for a better understanding and corresponding response to the unique values that exist within our powerful Canadian giving community,” says Allan Hoffmann, President & General Manager, Blackbaud – Canada.

The full study is available online at imaginecanada.ca.

The Multicultural and Newcomer Charitable Giving study was conducted by Ethnicity Matters’ partner agency Cultural IQ - using its CulturaPanel™ - between February 3 and March 2, 2020, with a stratified sample of 3,130 Canadian residents aged 18 years and over.

Imagine Canada is a national, bilingual charitable organization whose cause is Canada’s charities. Through our advocacy efforts, research and social enterprises, we help strengthen charities, nonprofits and social entrepreneurs so they can better fulfill their missions. Our vision is of a strong Canada where charities work together alongside business and government to build resilient and vibrant communities.

Ethnicity Matters is Canada’s leading authority in multicultural marketing and communications. We are a full-service business solutions company, dedicated to driving sales and growth for clients by connecting them to flourishing ethnic and new immigrant communities both at home and around the world.